JPrutzman Enterprises, LLC > Business > Are shortening your phone’s battery with your charging habits?

Are shortening your phone’s battery with your charging habits? 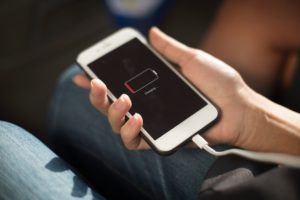 Today with mobile usage increasing at an amzing rate, it is important to charge your smartphone correctly.  I found the informative article You’ve Been Charging Your Smartphone Wrong on-line and wanted to share a few of the article’s do’s and don’ts that personally surprised me.

1. The best way to charge your phone is a little at a time, whenever you have a chance.

Just plug it in whenever you can, even if it’s for a few minutes, and you’ll be fine.

“Partial charges cause no harm,” according to Battery University.

2. Don’t fully discharge your phone before plugging it in.

Battery University says that so-called deep discharges — which happen when you use your phone until only a small portion of its battery life is left — wear down batteries.

3. Never fully charge your battery — and particularly not from a low charge level.

Charging your phone’s battery from a low 25 percent charge to 100 percent will reduce its capacity and shorten its lifespan.

In fact, charging from pretty much any amount to 100 percent is a bad idea. According to Battery University, lithium-ion batteries do “not need to be fully charged, nor is it desirable to do so. In fact, it is better not to fully charge, because a high voltage stresses the battery” and wears it out in the long run.

4. Try to keep your battery’s charge level between 65 percent and 75 percent.

If you can’t do that, shoot for keeping its charge level between 45 percent and 75 percent.

For more tips, read You’ve Been Charging Your Smartphone Wrong.